The ivy clad ruins of the 12th century St Bridget’s Kirk are all that now mark the site of a village of Dalgety which stood at the head of the coastal feature Dalgety Bay. The ruins which are maintained by Historic Scotland, retain many interesting features. The loft remains accessible, and there is a well-preserved ‘piscina’ by the altar. A piscina is a stone wash-basin for ritual rinsing of the communion chalice.

In the church grounds facing directly onto the shore are a number of old gravestones and epitaphs. St. Bridget’s Kirk was in existence some time before 1178, as it is mentioned in a Papal Bull written by Pope Alexander III declaring that “The Church at Dalgetty with its appurtenances” be founded. Appropriated at that time by Inchcolm Abbey, it was consecrated in 1244 by David de Bernham, Bishop of St. Andrews.

St. Bridget’s was used until the early 19th Century when it became unsafe, and in 1830 it was ‘unroofed’. In June each year, there is an open-air service in St Bridget’s Kirk.

A new church built in traditional Scottish ‘Gothic’ Kirk style and seating 500 was built about half a mile inland.

In 1843, the Church of Scotland split over a dispute over the distinction between Church and State. The Dalgety minister at the time left for the Church in England and the minister from Aberdour transferred to Dalgety. The population base in the parish had shifted some miles inland towards Fordell and Mossgreen and a church was built there, mainly for the local mining population.

There is a gap in the accurate historical record of the parish, due to a fire in the manse in 1897, which destroyed Session minutes and also the 17th century communion silver plate. The dwindling parish rendered the church in Dalgety uneconomic, and in 1940 it became a linked charge with Aberdour St Fillan’s Church. It survived the war and the proximity to the airfield at Donibristle, situated as it was virtually at the end of the main runway.

The first houses of the new settlement at Dalgety Bay were constructed in 1965, and the church link with Aberdour was dissolved. Dalgety Kirk once again stood on its own, serving the ever-increasing population of the new town. The property development expanded west, through the ground of the old airfield and away from the church. It became expensive to maintain and was too small and somewhat marginalised from the new town.

After a great deal of prayer, thought and fund-raising, a new church was built in the centre of the town in 1981. This was extended in 1989, and continues to serve the parish today.

The present modern church stands in the centre of the new town. Built in 1981 and extended in 1989, this is constructed of brick, and is a ‘hall-church’. That means that the main part of the building consists of a worship area and a large hall separated by a sliding sound – proof screen. The worship area seats 100, but with the screen withdrawn to create a larger worship area there is seating for up to 350.

The hall can be used independently and includes a stage for concerts or other activities, with an audience of 250. There are two other halls which can be subdivided if required, and a further three rooms for meetings. The suite is completed by the usual kitchen and comfort facilities. 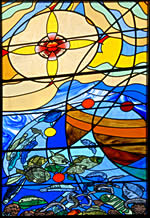 The two local primary schools hold their special services in the church, and Donibristle school has particularly strong links. After a major fire at the school, the church and congregation (with others) made a major contribution towards re-stocking the school materials. In recognition of this, the school raised funds and secured sponsorship to present a stained glass window to the church. This is the work of artist Fiona Brown and represents ‘Fishers of men’. It, too, was the product of community participation and adds to the atmosphere of the worship area.

The Minister is Chaplain to the two primary schools in the town; Dalgety Bay and Donibristle, and also chaplain to the local Air Training Corps She also conducts regular assemblies for the High School in Inverkeithing.

The record of the Church in Dalgety would not be complete without a mention of the Chapel associated with Donibristle House. Originally a private place of worship for the family of the old house, the chapel today has been preserved, and can still be visited from the footpath off Chapel Villas in the town.

Some of the above material is based on book “Of Monks and Ministers” — published by the Church, but now out of print.